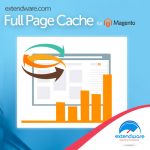 Footer Widget – The footer widget is an informational feature for power users that want to see which cache level is being used to serve a request. In previous versions you could use an HTTP header viewer to view this information, but many store owners found this to be complicated. The footer widget is a good alternative to using an HTTP header viewer. It will add a black bar at the very bottom of your site that tells such information as cache level, time to live, and the cache key.